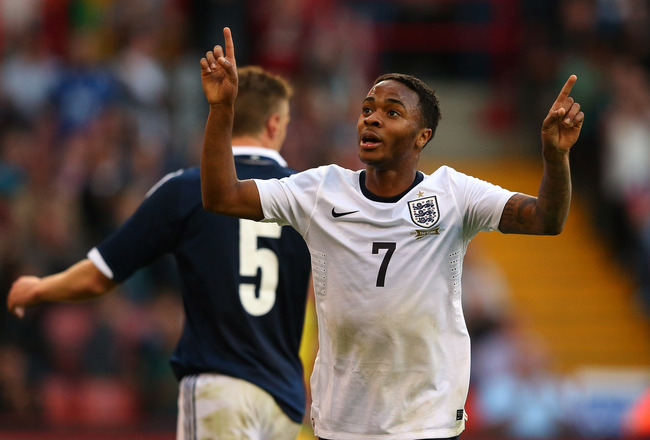 In light of the unfortunate news of Theo Walcott’s long-term injury, sustained in Arsenal’s 2-0 defeat of Tottenham Hotspur in the FA Cup and effectively ruling him out of the World Cup, as reported by BBC Sport, Roy Hodgson could be forgiven for feeling just a bit worried.

With Walcott out of contention and Jermain Defoe supposedly nearing a move to MLS’ Toronto FC, according to Sky Sports, the most experienced English forward Hodgson has at his disposal after Wayne Rooney is fellow Manchester United striker Danny Welbeck, on 20 caps.

Other options available for selection include Liverpool’s Daniel Sturridge (nine caps) and Southampton’s Rickie Lambert (four): not the most experienced or deepest forward line in England history by any stretch of the imagination.

The good news, however, is that England can make up for their shortage up front by strengthening their midfield and wings. A healthy mix of experience and youth in the midfield would now be grateful for an injection of quality ahead of the World Cup.

Step forward Liverpool’s Jordan Henderson and Raheem Sterling, who would provide just that. Here are five reasons they should make it into Roy Hodgson’s squad that will be heading to Brazil this summer.

Paul Gilham/Getty ImagesAsk any Liverpool fan about their best player this season, and second to Luis Suarez, who will deservedly take the plaudits from his scintillating record thus far, will be Jordan Henderson, who has been ever-present in Brendan Rodgers’ first team.

It wasn’t too long ago that Henderson was being written off as a £16 million flop, following a couple of indifferent seasons after his switch from Sunderland. That Rodgers was about to send him off to Fulham in the summer of 2012 is well-known; that Henderson has bounced back from all these setbacks is just as impressive.

Not only has Henderson finally found the confidence and form of his Sunderland days, but he’s seemingly added to his arsenal as well. Besides his legendary work rate and positional discipline, he’s added a touch of flair to his game as well: His back-heels, crosses and incisive passing have been a crucial element to the Reds’ final third; a record of five assists in 20 games thus far already betters his tally (four) last term.

The same applies to Raheem Sterling, who, besides storming back to the form he showed in the first few months of his debut season, has added a maturing awareness and clinicality to his game. Three goals and two assists in just nine starts this season is an impressive record for the young winger, still only 19.

In an England team short of full quality, what better than to reward these two up-and-coming talents with a place on the World Cup squad? Their development this season is evident; if they continue their rise in form and improve on their shortcomings—finishing is definitely on the agenda—then there’s no reason they wouldn’t be able to make an impact in Brazil.

Youth, Energy and a Different Dimension

The problem with the first-choice midfield, as we saw at Euro 2012, is that it’s not bursting at the seams with pace and stamina. Sure, Gerrard, Lampard and Carrick are all capable of dictating play from deep, and the former two are of course known for their ability to go forward and get themselves a goal, but it’s a midfield that can be caught out of position and brushed aside quite easily.

As evidenced by England’s recent international games, Roy Hodgson also recognizes the need to move away from the traditional two banks of four in a 4-4-2 system, which can easily be exploited by teams with powerful and quick midfields: Italy, Uruguay and Costa Rica will pose an interesting challenge.

Even out on the wing, though he can also operate centrally, James Milner is not the fastest of players, and as such, he doesn’t offer as much of a cutting edge as Hodgson would like—even though his all-round contributions are important.

With the introduction of Henderson and Sterling, England would get two players with the pace and stamina to both pressure and hurt teams. While in Gerrard and Lampard, England possess two world-class set-piece specialists, adding youth, energy and pace that would allow the Three Lions to develop other areas of their game.

On a potential counterattack, which England should surely take full advantage of given their pacy forwards in Rooney and Sturridge, having a midfield runner like Henderson carry the ball on the floor, and having another winger like Sterling to break open the defence, would be valuable assets in Hodgson’s disposal.

Paul Gilham/Getty ImagesWhen it comes to the midfield area, an especially useful description these days is “complete.”

Predominantly defensive midfielders should be capable of nicking a goal here and there, and attack-minded ones should also be able to track back and do some of the dog work to alleviate pressure off his team.

While Young and Townsend are known for their relative speed, they also don’t do quite as much work for the team defensively and thus may be prone to leaving gaps out wide, leaving defensive burdens for England’s full-backs. Gerrard and Lampard have shown signs of their age catching up to them this season, and their forays forward may leave holes in the central area that opponents can exploit on the break.

It is here that Henderson and Sterling step in and offer their impressive blend of athleticism, technique and defensive work. Often played as the furthest forward midfielder in Brendan Rodgers’ setup, Henderson has been a fine second line of defence (after the excellent Suarez and his harrying up front), while Sterling has exhibited on many occasions this season his willingness to track back and an underrated tackling ability.

Add their potential contributions in attack (especially Sterling, with his well-timed runs in behind opposing defences), and they represent two fine all-round attacking players that would make for a well-balanced team. Milner and Wilshere also fit the mold and would be perfect partners in an interchangeable, dynamic midfield unit.

Clive Brunskill/Getty ImagesIn the summer of 2012, Roy Hodgson was widely ridiculed for his supposed preference for Liverpool players. After all, in his squad of 23, he included six Reds, and the likes of Stewart Downing, Andy Carroll and Jordan Henderson hadn’t enjoyed the best of seasons at Anfield.

This time around, though, it’s completely different. While Glen Johnson hasn’t enjoyed the best of seasons down Liverpool’s right, he should make the plane to Brazil barring any extraordinary circumstance. Otherwise, Steven Gerrard is the England captain and Daniel Sturridge one of their newest striking hopes.

So the Liverpool contingent in the England squad will likely be used heavily in Brazil, which makes Henderson and Sterling potentially important additions to the team.

Henderson’s partnership with Gerrard this season has caught the eye: The way Henderson has assumed Gerrard’s famed lung-busting and swashbuckling attacking midfield play, and the ease with which the Liverpool captain has assumed his registaduties, harks back to the famous Gerrard-Xabi Alonso partnership during Rafael Benitez’s halcyon days.

Sterling’s combination play with Johnson down the Reds’ right flank will also come in handy, while Henderson and Gerrard will have been used to Sterling’s runs off the shoulders of the last defender. It remains to be seen how Brendan Rodgers will juggle his attacking line once Sturridge returns to full fitness, but Sterling should also have plenty of chances to dovetail with Sturridge in the coming months.

Ushering in a New Golden Generation

Michael Steele/Getty ImagesWhen the tag “Golden Generation” is mentioned in the context of the English national team, most reactions are of disappointment and frustration, such is the extent to which the current crop underwhelmed in major tournaments.

But it’s not that the term itself has any negative connotations—far from it. In fact, when the right infrastructure is put in place to groom a generation, it may well provide the platform from which to grow said “golden” era. The likes of Spain and Germany, not to mention many European club teams now, are living examples of such long-term thinking.

As Hodgson and England prepare for the swansongs of Gerrard and Lampard and usher out the old guard, so the new generation comes in and looks for ways to grow as a collective unit. And what better than to start with the World Cup?

Alongside the likes of Jack Wilshere, Adam Lallana, Daniel Sturridge, Danny Welbeck and Ross Barkley (among others), Henderson and Sterling are in prime position to cement themselves as England regulars in the coming years as they continue to mature in international tournaments to come.

While England must look immediately at doing as best as they can in the World Cup, Hodgson would do well to start immersing some of his young, precocious talent in preparation for future competitions. If there’s anything we’ve learned from Jordan Henderson and Raheem Sterling this season, it’s that they certainly won’t let their manager down.