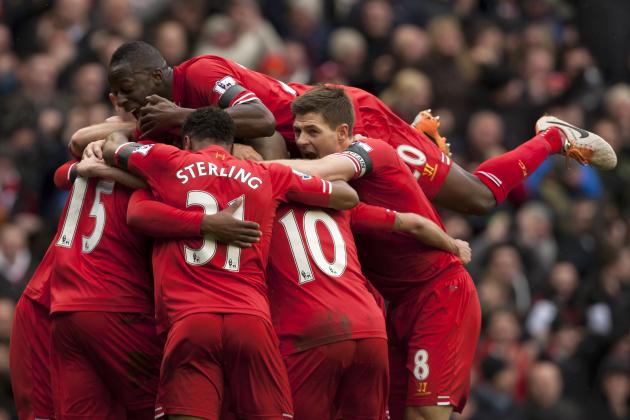 This time around, though, the pressure on the Reds is just slightly stronger, the expectations just slightly higher. Manager Brendan Rodgers will be looking to kick his side into gear and rediscover the momentum, form and confidence that saw them win so many plaudits last season.

News that Mario Balotelli may be on his way to Anfield from AC Milan, according to Ben Smith of BBC Sport, would be the icing on the cake for Reds fans, who have seen their team break the £100 million spending mark on eight players this summer transfer window.

If they are to take that next step and win silverware this season, here are five keys to success that Liverpool should keep in mind throughout the campaign.

There’s no doubt that any move for a striker to strengthen Rodgers’ squad in the closing days of the summer window—whether it is Balotelli or not—would alleviate the massive burden Luis Suarez’s exit placed on Daniel Sturridge’s shoulders.

Yet there’s no escaping the fact that Sturridge will remain pivotal to Liverpool’s fortunes this season, and his fitness is key to him enjoying a successful season.

Sturridge has had his fair share of injury troubles—his early exit from Liverpool’s preseason tour of the United States may well have prompted the Reds hierarchy to look for another first-team striker—and having two top-quality forwards would be a massive boon to the Reds’ fortunes.

One of the Premier League’s best goal scorers when available, Sturridge’s style of play is a perfect fit in Liverpool’s attack, and even as Rodgers looks to make full use of a much larger squad this season, the fitness of his leading man up front may well dictate how their season turns out.

A Consistent Back Five

For the time being, it seems as though Rodgers has settled on a central defensive duo of Martin Skrtel and Dejan Lovren; however, the as-yet untried prospect of Lovren on the right and Mamadou Sakho on the left is tantalizing, if it works as it promises to on paper.

With the signings of Javi Manquillo and Alberto Moreno, Rodgers will likely start with them as his first-team full-backs, but now he has a variety of backup options on the flanks as well who will look to compete for a place in the starting XI.

After a season that saw them concede 50 goals—in the end, a defining blemish on an otherwise outstanding campaign—it should be Rodgers’ priority to sort out a leaky defence if they are to sustain their performances from last season, particularly as their rivals have strengthened considerably as well.

That Liverpool have upgraded their defence is unquestionable; the key now is to ensure that there is a consistency in starting places across the back to ensure that they can form a tight, cohesive unit through playing together week in, week out.

Making Full Use of Substitutes

What’s a bigger squad good for if not for the manager to fully utilize it? Last year’s limited available options had Rodgers often starting with the same XI every week and left him with a dearth of genuine alternatives on the bench when he needed a spark or a game-changer late during a match.

This year, it’s totally different: Every position has competition, and good players will miss out on the 18-man match-day squad entirely from time to time, leaving first-team players with much more motivation to sustain their level of performance.

No longer will Rodgers need to throw debutants into the deep end, like he did with Brad Smith at Stamford Bridge in December, because of a shortage of squad options. He will now be able to call on good impact players from the bench when he needs to.

The Premier League allows each team to make three substitutions each match. For arguably the first time during his tenure at Anfield, Rodgers finally has the tools to take full advantage of this quota.

Beyond making the right in-game substitutions, Rodgers will need to do something with his squad this season that he hasn’t had to do too much in his previous seasons at Liverpool: choose different starters depending on opposition.

Now blessed with a myriad of options to choose from, he will need to manage his squad rotation policy right so it doesn’t hurt the momentum of players in form, but he can still use them to their full potential and ability when the fixtures start coming thick and fast.

Then there’s the crop of players whose place in the team may be severely threatened by new arrivals: Rodgers will need to be on top of his man-management game to keep the likes of Daniel Agger and Lucas Leiva happy over the course of a hectic season.

Managing squad rotation is something every top-level manager in every top-level team has to get right. This season is a good opportunity to show whether Rodgers is up to that task to bring success to Anfield.

Stick to a Set Vision

When it comes to a vision and a blueprint for the game, it’s safe to say that Liverpool fans and players alike can rely on Brendan Rodgers to have an underlying approach to the game that he insists on instilling into his charges.

Still arguably a side in transition and maturation, Liverpool showed signs of pure aesthetic perfection at times last season, yet there were also occasions when their tactical naivety let them down, as they struggled to find a few results when it mattered.

With another year gone by, however, Liverpool should be far more equipped when it comes to adopting and implementing Rodgers’ vision and approach—and it will help that he now has more tactically mature players at his disposal to do just that.

To align themselves with Rodgers’ ideologies, the Liverpool players must stick to the vision that got them to this position in the first place and not abandon it at will when time and results are at stake.