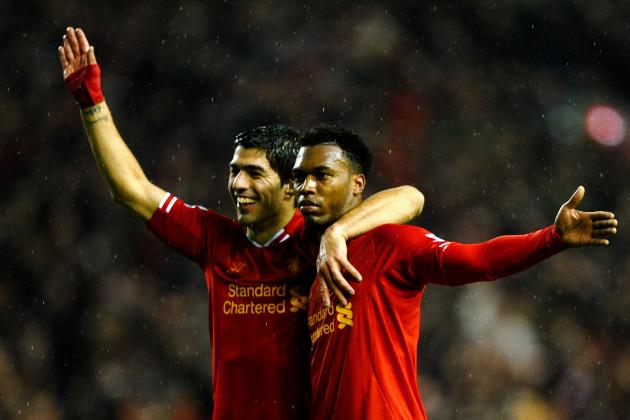 A few things have changed since Premier League fans were debating between three of its all-star strike partnerships this season: David Moyes has failed to unlock the potential of Robin van Persie and Wayne Rooney, Alvaro Negredo has seen his starting place usurped at times by Edin Dzeko and we’ve come to recognise the brilliance of entire forward lines, not just that of two strikers.

And so these days, instead of choosing between Manchester United’s Van Persie and Rooney, Liverpool’s Luis Suarez and Daniel Sturridge, and Manchester City’s Sergio Aguero and Alvaro Negredo, we’re now left to pick between the all-star attacking quartets of Liverpool and City.

As we look ahead to Sunday’s clash between Liverpool and Manchester City at Anfield—billed as a title decider—we’re not just considering the impact of the result on the title race, we’re also looking forward to seeing the league’s two most prolific attacks going at each other in what promises to be an open, exciting and pulsating match.

Here, we’ve compiled a fun comparison between the two forward lines across five categories—investment, potency, creativity, consistency and potential—before we arrive at our own conclusion on which is the better strike force. Enjoy and let us know your thoughts in the comments below.

First, let’s compare how the strike forces were assembled and for what price.

In signing undervalued players with potential—Raheem Sterling is the standout purchase here, having signed for Liverpool aged just 15—Liverpool have made some shrewd acquisitions who have blossomed under the tutelage of Brendan Rodgers.

Coutinho and Sturridge in particular were players on the sidelines at their previous clubs who are starting to realise their full potential. Indeed, both players have transformed the club’s attacking fortunes since arriving at Anfield just over a year ago.

Manchester City, on the other hand, have opted to sign big, established names from leagues around Europe, fighting off stiff competition from top clubs to land their targets. In doing so, besides the initial outlay in terms of the transfer fees, all four players are on stellar wage packages, making them even more expensive as an overall financial investment.

That said, it’s hard to argue with their success at City—for it was Dzeko and Aguero who scored the two goals in injury time that won the club their first ever Premier League title in 2012.

When it comes to initial investment, however, there was only ever going to be one clear winner here, a conclusion that might not have needed the above breakdown as justification. Liverpool win this round hands down.

Attackers need to score goals. This category is all about league goals scored, and how important they are to their respective teams going forward.

In terms of just goal-scoring output this season, the above comparison might be a bit surprising for some, considering Liverpool and Manchester City are both flying high in the Premier League “goals for” column.

The combined total of 59 goals from Liverpool’s attacking quartet, out of their staggering total of 90, means that almost two-thirds of all the club’s goals have come from these four players. Add Steven Gerrard’s 13 to the mix and you have 80 per cent of all goals coming from five players.

Contrast that with City’s foursome, who have contributed just 37 goals out of their 84-goal total. Yaya Toure, who mainly operates as a central, box-to-box midfielder, is a glaring omission with his club-high haul of 18, while Alvaro Negredo has contributed a respectable return of nine thus far. Still, that’s just 76 per cent of all goals coming from six key players.

Injuries and squad options have had a large say as well—barring Daniel Sturridge’s mid-season injury, which deprived him of some game time, all of the Reds’ forwards have notched their goals in a 28-game season thus far. A quick glance at City’s shows the fewer games they have managed, in particular Sergio Aguero, who is still an injury doubt for Sunday’s clash.

All of which means that, yes, Liverpool’s four forwards have the more impressive goal return, in terms of numbers and percentage of their club’s overall goals scored. It also means, however, that City have more options spread across the squad—which may yet be a deciding factor in where the Premier League trophy lands this May.

Now let’s see how they stack up in terms of creativity, which we’ll simplify into two categories: assists and chances created. (All statistics courtesy of Squawka.com.)

A close match, especially adjusting for the number of games played by each member here.

Suarez is the clear standout, both with the highest number of outright assists and with a chance creation record similar to that of a world-class playmaker like David Silva—which goes great lengths to show the phenomenal season that the Uruguayan striker is having.

When it comes to the supporting attackers, however, the numbers become more interesting. Despite having more games between them, Sterling and Coutinho only combine for 89 chances created, while Silva and Nasri have an impressive total of 132, which explains the dominant position City have held for most of the season in terms of total goals scored, and hints at what could have been for them had Aguero stayed fit for most of it.

We had a hard time choosing a winner here, so we’re going for the easy option—a tie. If Aguero had stayed fit for the majority of the season and played in as many games as the rest of his attacking partners, City could well have won this category by a mile.

As it stands, though, both sides seem to have creativity bursting at the seams, which can only be a good thing ahead of Sunday’s match.

Now for a category that is much harder to be backed purely by numbers and statistics. In evaluating consistency, we look for the contributions by the forwards on a week-to-week basis over the course of the season thus far.

It’s been an exhilarating campaign for the Reds, by almost all measures. At the base of it, their current first-placed position in the league table says it all—Liverpool have already overachieved this season.

Crucial to this excellent league performance has been Luis Suarez’s outstanding consistency. Despite missing his first five matches of the season through suspension, he has been an ever-present and even set a new record for league goals scored in one calendar month back in December. Daniel Sturridge carried the team on his back during Suarez’s early-season absence and stormed back to action after an injury layoff by scoring in eight matches in a row.

By the high standards he set for himself in the second half of the 2012/13 Premier League campaign, Coutinho has not quite performed to them this season. In contrast, this has very much been a breakout campaign for Raheem Sterling, who has cemented his place in the first team after a series of strong and mature displays since December.

Just as Suarez has set the bar for consistent excellence this year, Aguero has disappointed with his injury troubles. A league campaign that threatened to feature two genuinely world-class strikers running away in the scoring charts—much like Lionel Messi and Cristiano Ronaldo do in La Liga—has now resulted in a one-sided affair.

That Manuel Pellegrini has rotated between Alvaro Negredo and Edin Dzeko means that there hasn’t been much consistency in terms of Aguero’s strike partner—Negredo’s skill set clearly complements Aguero well, but in Aguero’s absence, Negredo and Dzeko have yet to set the league on fire.

The same applies for David Silva, who has shown flashes of brilliance at times this season and is rediscovering a good patch of form of late, but has also been beset by injuries. Samir Nasri is the flag-bearer for consistency in the City forward line this year, having shown a massive improvement in both attitude and attacking contribution since Roberto Mancini’s departure.

Suarez’s performance levels this season are arguably enough to make Liverpool winners in this category on his own. Aguero might have run him close, given his outstanding record when fit at the start of the season, but his injuries have robbed City of any chance of coming close to the Reds here.

Since there isn’t a set formula to calculate potential return—both in terms of attacking contribution over the coming years and indeed in the amount of money the clubs could receive if they decide to sell these players—we’ll simply consider the current age and go from there.

One of the many things that has stood out from Brendan Rodgers’ achievements this season is how young his squad currently is. The attacking quartet of Suarez, Sturridge, Sterling and Coutinho has an average age of just 22.75 years, which is both supremely encouraging from the club’s standpoint and also extremely exciting for the Premier League.

That Rodgers has gotten such a young team—don’t forget the relative youth of Simon Mignolet, Jon Flanagan, Joe Allen and Jordan Henderson—to fire their way to the top of the Premier League is a big testament to his philosophy and vision at Anfield.

With an average age of 26.75 years, City’s forward line can be rightly regarded as entering its prime. That Aguero, aged just 25, has, when fit, run 27-year-old Suarez so close speaks volumes of the potential of the Argentinian striker, who still has a few years to go at the top level just yet.

The same can be said of Silva and Nasri, who have exhibited the tenacity to show that they can still perform at peak level for a few years still, but Dzeko’s status as the oldest among all contenders here, and the fact that his future at the club is still up in the air adds an element of instability.

The four-year difference in average age is so considerable, it’s almost shocking to think what this Liverpool attack will be capable of in a few years’ time, when they collectively arrive at City’s level. That Liverpool signed all four of their forwards at prices arguably lower than market value also makes their potential resale value much higher than City’s from a profit margin standpoint.

From our verdicts across five categories here, Liverpool emerge as the clear winners in an attack-against-attack comparison with Manchester City.

They’ve signed their forwards at a relatively younger age, meaning that both the initial investment and the potential return are much higher, while their output and consistency are no doubt the more impressive of the two.

City come close in creativity, hinting that their season has been dampened by a very significant factor—the ongoing injury troubles of Sergio Aguero.

It’s intriguing to think how City would shape up here if Aguero had remained fit to complete a whole season—perhaps Pellegrini’s men would really be out of sight in the “goals for” column in the Premier League.

As it stands, however, it’s the 90-goal Reds hosting the 84-goal Blues at Anfield this Sunday. The imminent return of Sergio Aguero (per the Mirror), however, makes it that bit more interesting.