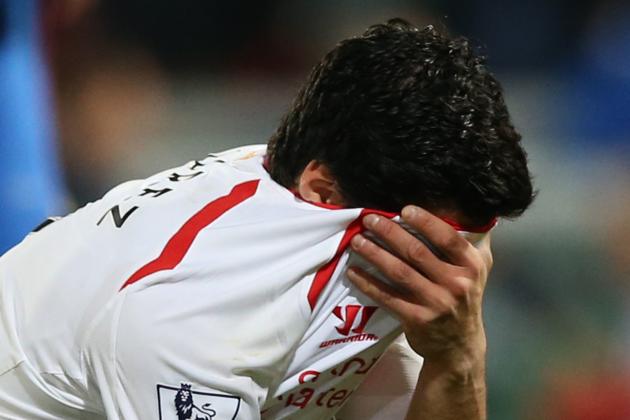 It started so well for the Reds, who stormed into a commanding lead courtesy of Joe Allen, Daniel Sturridge and Luis Suarez. Their basic requirement, to get the three points needed to keep the pressure on Manchester City, turned into a call for more goals in an attempt to reduce the goal-difference deficit.

But as they piled their numbers forward, suddenly their defence started to look shaky, and all it took was a deflected Damien Delaney strike on 79 minutes to kick-start a remarkable comeback for Palace.

As it stands, Liverpool have returned to the summit of the Premier League with 81 points, a point ahead of City, whose game in hand will be played at home against Aston Villa on Wednesday.

Here are six things we learned from Liverpool’s capitulation on Monday.

It was a bullish Brendan Rodgers who suggested before the match that the title race wasn’t over, and that Liverpool had goals in them to chase City on goal difference, per The Guardian.

True to his word, his team exhibited the attacking flair and strength they’ve shown all season—but when they went 3-0 up, they decided to go for broke to challenge City’s goal-difference domination, which ended up handing Palace the impetus in the game.

Only Rodgers will know why he decided to replace Raheem Sterling (and not Lucas Leiva) with Philippe Coutinho right before Delaney’s goal, and only he will know why it was Victor Moses who was sent on for Sturridge, and not Daniel Agger.

Only Martin Skrtel will know how he was dragged so far out for Gayle’s equalizer, and only Glen Johnson will know why he failed to close down on both Delaney and Yannick Bolasie in the build-up to Palace’s goals.

Far from pinpointing any individual scapegoat, Liverpool need to address some serious “game management” issues this summer. Youth, energy and passion will take you a long way, but experience and cool heads need to prevail.

We mentioned in the previous slide the abject performances of Lucas and Moses, but they don’t touch on the root of the problem: Liverpool simply don’t have a strong enough squad to win a Premier League title.

A look at Manchester City and Chelsea‘s substitutes benches, along with a quick comparison with Liverpool’s, shows just how far the Reds are in terms of squad depth and strength, and their misery was compounded by Moses’ miss at the death.

We suggested a few weeks ago in the aftermath of the hard-fought win over Norwich City that Jordan Henderson’s last-gasp red card against City could prove to be costly in the title run-in. A couple of weeks on, we can’t help but think whether his presence on the Selhurst Park pitch on Monday could’ve helped stem Palace’s midfield momentum and plugged Liverpool’s gaps in the middle.

All the same, just as Rodgers was forced to bring on Iago Aspas against Chelsea, he didn’t have a single match-winner on the bench save for Coutinho.

The reality is that for a squad as shallow as Liverpool’s, they have done extremely well to find themselves top of the league on the second-to-last matchday of the season.

Transfer Failures Will Need to Be Rectified This Summer

Was a failed January transfer window, during which Liverpool failed to strengthen at all, the reason behind this late-season loss of momentum? Or were the seeds already sown last September?

With the obvious benefit of hindsight, we’ve seen that Liverpool’s shallow squad has been a big reason behind their failure to close down games or to put themselves out of sight when they’ve needed to.

Compared to the winter of 2013, when they signed Coutinho and Sturridge, this January was a major disappointment, but the warning signs were there after what has proved to be a weak summer of 2013.

Out of eight summer arrivals last year, which included the hapless Aspas, Moses and Aly Cissokho (to name but three), only Simon Mignolet and Mamadou Sakho have managed to make themselves regular first-team options.

While the likes of Henrikh Mkhitaryan, Diego Costa and Willian didn’t end up arriving at Anfield last summer due to the lack of Champions League football, Liverpool now have that on offer for next season.

With their competitors likely to splash the cash to bring in reinforcements of their own, the Reds face a pivotal summer ahead if they want to continue challenging at the top of the table for the foreseeable future.

Was This Liverpool’s Best Chance at a League Title?

It is perhaps because of the strange nature of this season, where seemingly most big teams faced a transitional year, that the Premier League has played out to be such an open and exciting competition.

But it is also that same reason that might result in major strengthening by all of Liverpool’s rivals ahead of next season, and they may well face keener competition by the time the new season starts in August, especially with the financial might of Manchester City, Chelsea and Arsenal.

In hindsight, will this have been Liverpool’s best chance at a league title for many years to come? There are those who argue that Rodgers has already done an excellent job with the limited resources he has and that the only way for the Reds is up, but the nature of this season will also surely have been a factor in their lofty position.

Mathematically speaking, it’s still possible for Steven Gerrard to lift the Premier League trophy this Sunday, but that would require major favors from Aston Villa and West Ham United, both of whom are to visit the Etihad Stadium.

The tears and general despondence shown by Suarez and Co. when Mark Clattenburg blew his whistle on Monday showed that the players themselves might be thinking the same.

Tony Pulis Will Surely Now Win Manager of the Year

One of the side narratives leading up to the match was the battle between Rodgers and Pulis for the Manager of the Year award.

For 78 minutes, it looked as if Rodgers would win on the day, putting the pressure back on Manchester City and reigniting Liverpool’s hopes for the title. Then in 12 minutes, Pulis wrestled the match back in his grasp, in the process changing the title race and the destiny of the Manager of the Year award.

For so long branded as a negative manager, Pulis deserves credit for bringing on Gayle, Glenn Murray and Thomas Ince in a bid to turn the match around when he would’ve been forgiven for throwing on defensive additions.

Pulis‘ transformation of Palace’s fortunes and securing of their Premier League status have rightly attracted many plaudits—but Rodgers’ taking of Liverpool from seventh to title challengers needs to be recognized as well.

It Ain’t Over Till It’s Over

If Liverpool fans are despondent about losing the league title already, however, a quick glance at the Premier League table suggests that there is still some hope.

They will be requiring help from Aston Villa or West Ham United if they are to salvage the title, but the reality is that Manchester City still have two matches to play to confirm a title win.

If the Reds beat Newcastle United at Anfield next week, who knows what could happen…