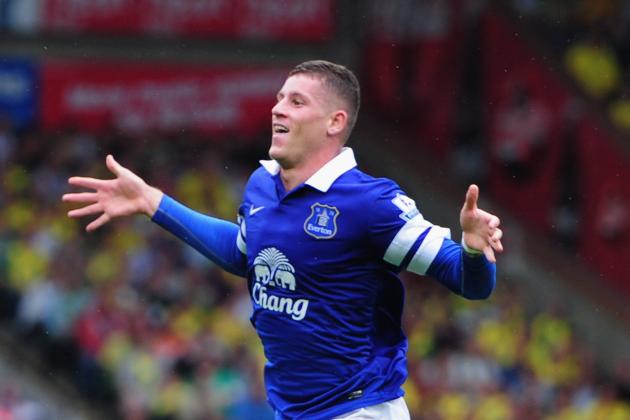 With Liverpool having all but secured a place in next year’s Champions League, the Reds have been linked with potential summer signings right, left and center. Everton’s wonderkid midfielder, Ross Barkley, has been rumored as a shock £38 million target, according to Chris McKenna of the Daily Star.

Having made a splash in his debut season in the Premier League, Barkley has already been tipped as one of the finest talents of his generation—even a dark-horse option to make Roy Hodgson’s England squad for the World Cup this summer.

Which means that, even though Blues boss Roberto Martinez has already vehemently denied, via Paul Collins of the Daily Mail, the possibility of a first player move across Stanley Park since Abel Xavier in 2002, Liverpool fans will be dreaming at the prospect of Barkley turning out for them every week next season.

And for good reason. While not an ever-present in Martinez’s starting XI—not surprising given the amount of options at his disposal—Barkley has shown enough promise to suggest that he will be a Premier League force for many years to come. He might just have the potential to go down as one of its all-time greats.

Which is why, remote as the possibility may be, Brendan Rodgers should go all-out for Barkley.

At just 20 years of age, Barkley appears to already have the full set of attributes to succeed in the Premier League.

Blessed with pace and quick feet, Barkley is more than capable of taking on and dribbling past his man, while his physical power means that he is hard to shrug off, difficult to defend against and a forceful presence in the midfield.

A powerful left foot and a love for the spectacular mean that the Everton No. 20 is no stranger to long-range screamers; indeed, his goal this season against Norwich City was a prime example of him pulling the trigger and scoring with power, while given just a tight space to work with.

He has also exhibited composure in his finishing. A wonderful solo goal against Newcastle United a couple of weeks ago, in which he took the ball in his own half and proceeded to run past a few defenders before unleashing a shot into the top corner, will go down as one of the season’s finest efforts.

In the next few years, Barkley will no doubt be looking to improve his defensive and all-round contributions, while also developing the maturity that sees him make use of his technical and physical attributes to the best effect.

On raw potential alone, however, Barkley has all the tools to succeed Steven Gerrard as the pre-eminent attacking midfielder in the English game.

While we’re on the topic of Gerrard, a lot has been written this season about his status in the Liverpool dressing room and his importance in the Reds’ impressive title run, both as a player and as a talismanic leader.

Without going as far as to say that Barkley will be England’s next captain and go down as one of the country’s greatest-ever players so early on in his career, all the signs so far suggest that he has the same big-game mentality as the current Liverpool and England captain.

Barkley has claimed, via McKenna, that big games bring out his best and that he likes “getting the chance to step up and show what [he is] capable of.”

His attacking play exudes confidence in abundance, while his unabashed attitude on the pitch perfectly complements his direct style and penchant for a long-range stunner.

As Liverpool can increasingly look forward to participating in Europe’s pre-eminent club competition next year, they could do with a few more match-winners and on-pitch leaders to add to their current swagger.

Rodgers would be hard-pressed to find a better option on the block than Barkley.

Not only would Barkley bring a rare and complete set of playing attributes and a commendable mentality, but he would also fit right into Rodgers’ young British revolution at Anfield.

His table-topping Liverpool side is one of the youngest in the Premier League, with Daniel Sturridge, Raheem Sterling and Jordan Henderson—and increasingly, Joe Allen and Jon Flanagan—all playing prominent roles in their exciting charge toward the top of the league this season.

Two common characteristics of these all-star youngsters are technical proficiency and mental application, both of which Barkley has in his locker. His brand of physical and direct attacking midfield play would be an interesting alternative to Philippe Coutinho’s silky dribbling and outrageous through balls, though the all-round midfield play of the Brazilian, himself only 21 years old, has matured spectacularly in recent months.

Add in the fact that the likes of Luis Suarez, Mamadou Sakho and Simon Mignolet will be entering their prime years in the short to medium term, and Barkley would be walking into an accomplished Liverpool team still with much potential to fulfill.

Rodgers’ accomplished man management has worked wonders on his young charges in his two seasons at Anfield, and he would no doubt be able to unlock even more from Barkley’s game if he does cross Stanley Park.

The key is for Liverpool to follow up on their interest with a substantial bid to tempt Champions League-chasing Everton into letting their prized asset go, which won’t be easy. Then, there’s the whole stumbling block of Barkley being a boyhood Evertonian.

But just imagine a Liverpool attack next season featuring Suarez, Sturridge, Sterling, Barkley and Henderson on the break at pace.