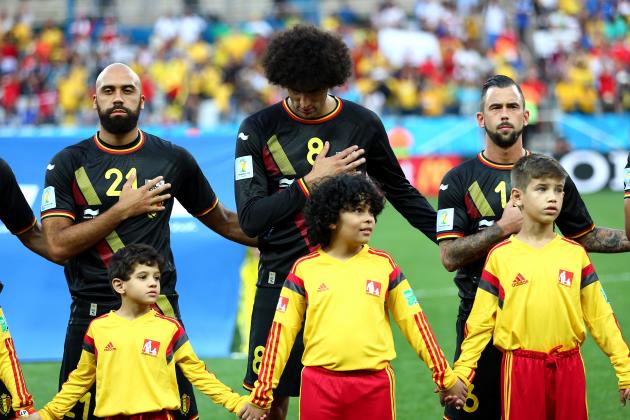 Stand-in captain Jan Vertonghen scored a 77th-minute winner as Belgium secured top spot in Group H with a 1-0 win over South Korea on Thursday, who crashed out of the 2014 World Cup with just a single point.

It was a poacher’s finish from Tottenham Hotspur defender Vertonghen, who got himself into the box after a Belgium attack to finish past South Korean goalkeeper Kim Seung-gyu, after DivockOrigi, again impressing as a substitute, drew an unconvincing parry from his shot.

Midfielder Steven Defour had been sent off just before half-time after a nasty challenge, leaving Marc Wilmots’ side with 10 men for the entirety of the second half, but Hung Myung-bo’s men will have been disappointed with yet another uninspiring showing.

The Belgians completed their group-stage campaign with three wins out of three and will take on the United States in the round of 16, after their 0-1 loss to Germany on the same day saw them finish second in Group G.

But Wilmots will know that his side still needs to improve on a surprising general lack of fluidity given the midfield and attacking talent across his star-studded squad, especially against a USA side high in confidence after qualifying from the tournament’s “Group of Death.”

For all the pre-tournament talk about Belgium being dark horses and having a young and talented squad, despite winning Group H with a 100 per cent record, they have yet to really impose themselves on the World Cup.

Against a relatively easy group—especially compared to the USA’s—with Algeria, South Korea and Russia, it’s been a surprise to see Belgium winning all three games by just a single-goal margin: They ended the group with nine points and a goal difference of just three.

Perhaps a misfiring Romelu Lukaku (more on him later) has been the main reason, and that a fit Christian Benteke would’ve given them the attacking impetus and thrust that they needed. But it’s not just been Lukaku that has failed to impress: Even the likes of Eden Hazard and Nacer Chadli have disappointed, the latter losing his place to Dries Mertens after an unconvincing first game against Algeria.

A strong midfield provides an excellent base for the Belgian attack, but the fact that Wilmots’ first-choice defence doesn’t feature a single out-and-out full-back may be a factor in their disjointed performances, despite Vertonghen scoring his winner on Thursday.

Curiously, Vertonghen became Belgium’s first starting player to score a goal in the World Cup since Wilmots himself in 2002. Ultimately, it may not be a problem in Wilmots’ selections, but there are no two ways about it: Belgium should be doing much better than they are.

A Change in Approach for Wilmots?

Such is the depth and strength of the Belgian World Cup squad, thatWilmots could afford to make some changes to his starting XI on Thursday and still emerge from the tunnel with a team oozing excitement and class.

But while it could’ve been purely a plan to give some of his bench players a good run-out against a South Korea squad weak on paper, Wilmots’ decision to drop misfiring Lukaku, who has disappointed with a couple of pedestrian displays this summer, for a more dynamic and interchanging forward line of Kevin Mirallas, DriesMertens and Adnan Januzaj was a bold choice.

They didn’t get on the scoresheet, but Mertens’ direct style continued to shine, while Mirallas mirrored his contributions up front andJanuzaj offered creativity and a close control that is arguably unique in a midfield more known for its power and physicality.

Could this be how Wilmots approaches his round of 16 tie with the USA next Tuesday? Even taking into consideration Hazard’s likely return to the starting lineup, this style, without a recognizable and traditional center forward, could be the key to unlocking a more coherent attacking performance from the Belgians.

With Marouane Fellaini and Axel Witsel in top form so far this tournament—Defour’s suspension wasn’t going to impact proceedings on Tuesday anyway, since Belgium’s starting midfield picks itself—and Kevin de Bruyne motoring down the middle of the park, this is a plan that, on paper, could finally unleash the multitude of goals that Belgium promised before the World Cup started.

USA Enter the Round of 16 on a High

In a round of 16 featuring runners-up participants like Chile, Uruguay, Mexico and Switzerland, Belgium may feel that it has enjoyed better luck, pairing with the United States. Yet judging from the Americans’ performances over the course of three games in Group G, they will provide a stern threat on Tuesday.

With a thrilling win over Ghana and only the last minute of stoppage time preventing a remarkable comeback against Portugal, the USA will be riding high in confidence after securing qualification from the group stages, where they have gained many a neutral supporter with their energetic and passionate performances.

And while Jozy Altidore may still not be fit for the Belgium tie, JurgenKlinsmann has conversely strengthened his midfield by playing captain and all-rounder Clint Dempsey up front, packing in pace and power behind him to allow his full-backs to support the American attack.

This allows for an intriguing battle in the middle of park at the Arena Fonte Nova in Salvador on Tuesday, with the impressive Kyle Beckerman and the powerful Jermaine Jones taking on the physical Fellaini-Witsel Belgian midfield axis.

Plus, Belgium aren’t exactly the most convincing team out of all group winners taking part in the round of 16: Only Costa Rica are the true surprise package—all others have been hugely impressive, unlike Wilmots’ side. The USA’s team ethic and spirit will ask huge questions of Belgium.