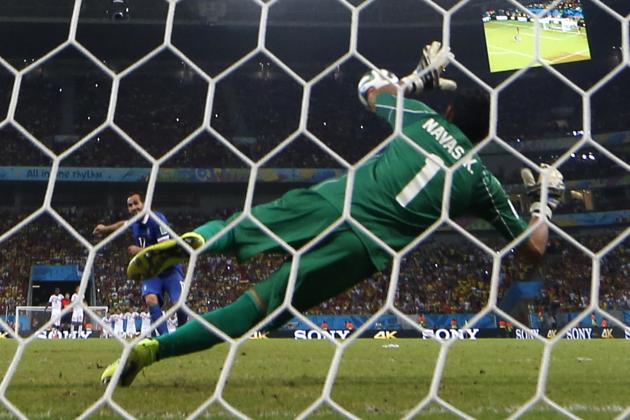 After eight exciting games in the round of 16 that featured two penalty shootouts and three extra-time contests, we are now officially into the quarterfinal stage of the 2014 World Cup.

Over Friday and Saturday, we have plenty of mouthwatering action to look forward to. Hosts Brazil welcome impressive dark horses Colombia and France take on Germany in two continental clashes on July 4. July 5 sees the Netherlands come up against surprise package Costa Rica, while Argentina play Belgium.

As we look forward to the next round in one of the most scintillating and unpredictable World Cups in recent memory, let’s look back in chronological order at 10 key moments from the round of 16 that defined how the ties were settled.

Brazil coach Luiz Felipe Scolari has since attributed his team’s struggles in the World Cup to pressure, but we didn’t need his confirmation to know just how hesitant they have appeared this summer.

Their performance against Chile at the Estadio Mineirao in Belo Horizonte on June 28, when Jorge Sampaoli’s men looked the home side with their dominance of possession, showed just how big of a challenge winning a sixth World Cup on home soil would be.

They would ultimately prevail in the penalty shootout, thanks to Neymar’s coolness under unimaginable pressure and Gonzalo Jara’s miss, but they only escaped the jaws of defeat in the final minute of extra time, when Chile’s Mauricio Pinilla hit the crossbar with Brazil goalkeeper Julio Cesar already beaten.

Pinilla has since gotten a tattoo of the miss on his back, according to Charlie Scott of the Daily Mail, with the inscription, “One centimeter from glory.” A cruel but defining end to an impressive tournament for Chile.

Luis Suarez’s biting incident with Italy’s Giorgio Chiellini in their final group-stage match and the former’s subsequent ban threatened to overshadow the entire buildup to the round-of-16 clash between Colombia and Uruguay on June 28.

Suarez’s replacement in attack, Diego Forlan, showed just how much Oscar Tabarez’s side would miss the Liverpool striker, but perhaps not even Suarez would have been able to save them against an irrepressible Colombia side in top form.

James Rodriguez had stepped up to become his country’s talisman in the absence of star striker Radamel Falcao by scoring in every group-stage game, and he didn’t disappoint in the round of 16.

A scintillating moment of magic on 28 minutes saw him unleash an exquisite left-footed volley that cannoned off the crossbar and into the back of the net to send Colombia into a lead they never looked like conceding. He followed up with another goal 22 minutes later.

Perennial underachievers in the World Cup, the Netherlands stormed into the round of 16 with a series of excellent performances in the group stage. Then they met Mexico in Fortaleza, where they were given a tough challenge in a game that had all the drama associated with the knockout stages of the World Cup.

Mexico even looked on course to knock out the Oranje, as Giovani dos Santos’ volley on 48 minutes gave them a one-goal lead for 40 minutes before Wesley Sneijder managed to equalize for Louis van Gaal’s side.

And right at the death, Arjen Robben, who has been a revelation in Brazil this summer, attracted controversy by going to ground following a Rafael Marquez challenge, winning an injury-time penalty.

Klaas-Jan Huntelaar showed composure in reserve to score the winning goal, but Robben, who has since admitted he dived in the first half, stole all the headlines with his theatrics.

The Arena Pernambuco in Recife probably didn’t expect to play host to Costa Rica and Greece when the group-stage fixtures were announced, but on June 29 the crowd witnessed a historic moment as Costa Rica reached the last eight for the first time ever.

They had Navas to thank, as his stellar saves from shots by Kostas Mitroglou, Theofanis Gekas, Kostas Katsouranis and Lazaros Christodoulopoulos kept the Central Americans in the tie after extra time. By the end of a heroic 120 minutes, Navas had saved seven of the eight shots he faced in the game.

And he wasn’t done yet: After his normal- and extra-time heroics, Navas stepped up to the plate and faced off the Greeks in what surely had to be one of the most accurate penalty shootouts in recent World Cup history.

Costa Rica scored from their first four attempts, which meant that a Gekas miss on Greece’s fourth penalty would take the shootout to match point. Navas pulled off the defining save before Michael Umana notched past Orestis Karnezis to send his side into rapture.

In the end, France’s win seemed to be routine, as Nigeria finally relented to Paul Pogba’s header and Joseph Yobo’s own goal to let France through to the quarterfinals.

But the June 30 tie in Brasilia wasn’t without controversy: On 20 minutes, Nigeria’s Emmanuel Emenike latched onto Ahmed Musa’s cross and poked past Hugo Lloris to hand the Africans a shock lead.

Or so they thought.

A raised flag from the linesman cut short the Super Eagles’ celebrations. It was a tight but seemingly correct decision in hindsight, one that might have greatly affected the outcome.

It’s been a difficult World Cup campaign for Andre Schurrle—so impressive and reliable as a goalscorer at club level for Chelsea but overshadowed by the supreme Thomas Mueller and evergreen Miroslav Klose in Brazil, despite wearing No. 9 for Germany.

So he was due a moment to breathe life back into his personal tournament and did just that after coming on as a half-time substitute for Mario Gotze against Algeria on June 30.

With two attackers spearheading the German offense in Mueller and Schurrle, Joachim Low’s side finally broke the deadlock, and it was Schurrle who delivered with an outrageous backheeled goal in the second minute of extra time past Algeria keeper Rais M’Bolhi.

It proved to be the decisive moment in Porto Alegre. It took the Germans another 18 minutes to score through Mesut Ozil, which rendered Abdelmoumene Djabou’s goal in injury time mere consolation.

Some argued that his performance was worthy of a Man of the Match award due to his constant threat to Ottmar Hitzfeld’s Switzerland, while some insisted he was the most wasteful player in Sao Paulo that afternoon.

No matter: At 118 minutes, Di Maria finally produced the goods.

To be sure, it was Lionel Messi who capitalized on a mistake to run at the Swiss defence and lay off the ball to his El Clasico rival. But the Real Madrid man still needed composure in abundance to finish past the impressive Diego Benaglio, and Di Maria answered Argentina’s call when his country most needed him.

It could’ve been so different, though: Switzerland were literally inches away from taking the tie to a penalty shootout.

But instead of scoring an equalizer in injury time, Blerim Dzemaili managed to hit the post from a few yards and then prod the rebound wide, turning Switzerland’s golden chance into a “coulda-woulda-shoulda” moment to rival Pinilla’s for Chile.

Dzemaili’s miss wasn’t quite as picturesque as Pinilla’s to merit a commemorative tattoo, but it almost provided the cherry on the top of what was an intense final few minutes of extra time on the back of 110 minutes of testy football.

Argentina survived to fight another day.

The United States’ Chris Wondolowski rounds off our pick of close shaves in the round of 16 and joins Pinilla and Dzemaili as those who will regret their crucial misses for some time to come.

Wondolowski’s chance came against the run of play against a technically superior Belgium side, but it was a simple piece of Route 1 football that almost undid the Belgians in injury time, as he was sent clear after Jermaine Jones headed on a Geoff Cameron long ball.

With the goal—and Thibaut Courtois—at his mercy, Wondolowski contrived to blaze over the bar, letting the game stand at 0-0 and taking it into extra time.

The Americans may offer the defence that the assistant referee had put up his flag to indicate offside, which would’ve ruled the goal out anyway, but we’ll never truly know what could’ve happened if Wondolowski had completed his task first.

Romelu Lukaku Comes off the Bench

Funny how some things work out.

For Belgium’s three group-stage games, Romelu Lukaku failed provided the thrust and attacking threat he was asked to and instead was outshone by teenage striker Divock Origi, who took Lukaku’s place in Marc Wilmot’s starting XI on July 1 against the United States.

So who better to turn the game in Belgium’s favor than Lukaku himself? The Chelsea striker came off the bench to replace Origi for the extra-time period and finally announced his arrival in Brazil with a barnstorming performance that led to Kevin De Bruyne’s opening goal.